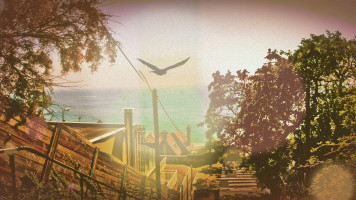 Posted by  Chris Leave a reply

About The Release
With the beginnings of UK based label Pragmatic Theory inspired by interactions & admiration of the talent found within an underground music community, happening upon Bläp Dëli’s page, we unanimously felt we had stumbled across someone special. Immediately reaching out, talks of releasing both his first LP vinyl & Pragmatic Theory’s, went underway. In capturing the musical essence of the finished album, its cover art was an integral representation of the project as a whole & we had the pleasure and fortune to be able to work with the extremely talented LA artist Augustine Kofie to fulfil that aim. Spanning a wide range of genres & styles that align with the vision of both the artist Bläp Dëli & label Pragmatic Theory alongside the perfect visual landscape Kofie has created, we welcome you to join us in this journey a year in the making of which we hold close to our hearts. Please enjoy Bläp Dëli’s ‘Whispër.Më.’
Bläp Dëli ‘Whispër.Më’ LTD Edition Vinyl is available from our Website, Bandacmp page & as of the second week of June HHV, Jetset Japan & various Worldwide independent record stores. ‘Whispër.Më’ will also be available digitally through i-Tunes, Amazon, Juno, Spotify & various online digital music sites in the coming days & weeks.

About The Artist
California beatmaker and Goldie Records founder Bläp Dëli [Emmett Kai] began his venture into electronic music in late 2011. With years as an instrumentalist in various punk/metal bands, transition into making his own music came easy leading to an artist and musician group in 2012: The Sandbox Collective, a San Francisco and Sonoma County based label. With all of Bläp Dëli’s projects released independently, the collaboration with Pragmatic Theory Records and focus on his current label Goldie Records made born to his first 12″ LP “Whisper.Me” (June 2014). Currently residing in Healdsburg and Santa Rosa area, Bläp continues to make music and play in bands.

About Artwork
We feel truly blessed to be working with Los Angeles based street artist Augustine Kofie, whom has established himself within the local graffiti scene since the mid 1990s & has then been manifesting a coalescence of artistic & structural aesthetic internationally. Having had no formal Art background past high school, Kofie’s natural inclination to experimentation of drawing was expressed when he was younger by use of the materials & supply available around his home by his mother, whom studied Fine Arts at UCLA. Further developing his skills through the type of experience gained as a veteran graffiti artist, his abilities, perspective, and approach of personal visual expression was further strengthened and veered toward merging simple shapes & linear lines on a structural form skilfully approached to become his canvas.
Along with his visual creations, Kofie has also been exploring with music from back in 1995 tying in another connection of providing the cover art of Pragmatic Theory’s first vinyl to beatmaker Bläp Dëli, who also resides in the same area.
For more of Augustine Kofie’s work please see keepdrafting.com

About The Label
UK based label Pragmatic Theory began as a movement for the love & appreciation of music & inspiration from the talent found within the SoundCloud community. In 2012 marked the first compilation being a Curtis Mayfield tribute released as both an album (mcs/beatmakers) and a beat tape. Not long after, the Pragmatic Theory bandcamp platform continued to release alternating compilations to support both underground scenes that shared the same love for music as well as independent artist releases. Continuing to be blessed with many talented artists/beatmakers as well as a loyal fan base, growth of the label opened up another opportunity to venture into vinyl & physical releases. Today the ethos of the collective & label remains the same, to provide a platform to promote underground artists & share with listeners new & innovative music. All for the love of music & the beat culture.